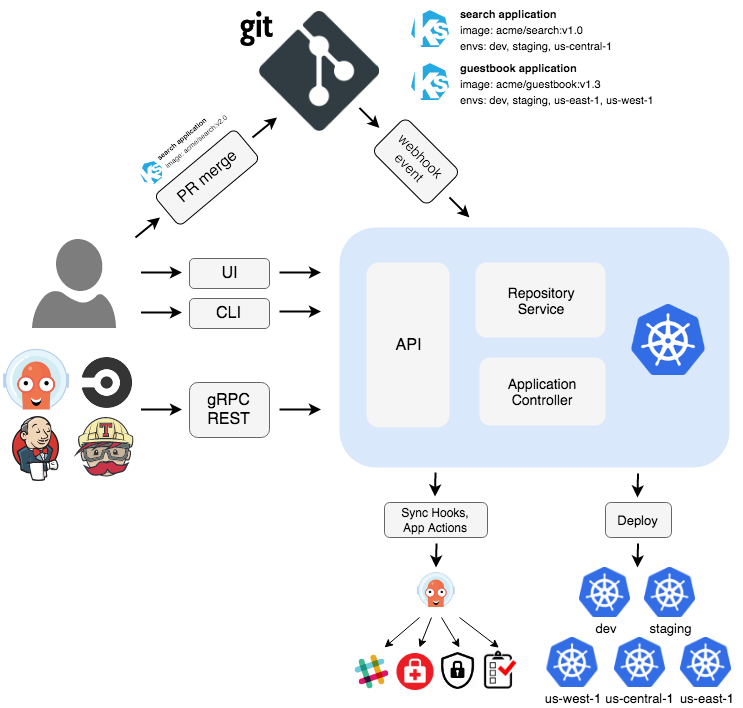 The API server is a gRPC/REST server which exposes the API consumed by the Web UI, CLI, and CI/CD systems. It has the following responsibilities:

The repository server is an internal service which maintains a local cache of the Git repository holding the application manifests. It is responsible for generating and returning the Kubernetes manifests when provided the following inputs:

The application controller is a Kubernetes controller which continuously monitors running applications and compares the current, live state against the desired target state (as specified in the repo). It detects OutOfSync application state and optionally takes corrective action. It is responsible for invoking any user-defined hooks for lifecycle events (PreSync, Sync, PostSync)

Developers merge their changes back to the main branch as often as possible. The developer's changes are validated by creating a build and running automated tests against the build. By doing so, you avoid integration challenges that can happen when waiting for release day to merge changes into the release branch.
Continuous integration puts a great emphasis on testing automation to check that the application is not broken whenever new commits are integrated into the main branch.

GitHub Actions workflow settings are described in each repository in the .github/workflows directory.

Each GitHub repository has secret keys for publishing images, for sending messages to telegrams, etc.

Continuous delivery is an extension of continuous integration since it automatically deploys all code changes to a testing and/or production environment after the build stage.
This means that on top of automated testing, you have an automated release process and you can deploy your application any time by clicking a button or automatically.

Our continuous delivery uses argoCD and keeps track of the "dev" directory in the "deploy" repository. The development application configuration for argoCD is located at deploy/dev/app.yaml. Any changes made to the dev directory of the deploy repository will be reflected on the development server.

Continuous deployment goes one step further than continuous delivery. With this practice, every change that passes all stages of your production pipeline is released to your product.

Our continuous deployment uses argoCD and keeps track of the "prod" directory in the "deploy" repository. The production application configuration for argoCD is located at deploy/prod/app.yaml. Any changes made to the prod directory of the deploy repository will be reflected on the production server, but unlike development server for added security, automatic initialization of synchronization is disabled on the production server. This means that to start a new synchronization, you need to click on the "SYNC" button in the argoCD client, or do it through the console.